Unique in its versatility, Third Eye wireless thermal attachment is a smart solution for thermal capability on the go. Paired with smart glasses, Third Eye's patent-pending design delivers lightweight, hands-free convenience - creating a multitude of uses never before available on the market.
What's more, Third Eye is unconstrained by operating systems and ports. The same unit can operate with iOS and Android and, if desired, transmit a thermal video from a distance of up to 10 yards.
Developed by innovation-driven Round Concept Third Eye's unique, patent-pending design adds a whole new dimension to the functionality of smartphones, tablets and wearables while bringing everyday practicality to thermal imaging.
* Hardware and Software is developed by AXONIM Devices

Have you ever thought about what is in common between builders and, let’s say, a firefighter? The answer is that they have the thermal vision devices in their arsenal of tools that are also known as heat vision goggles or cameras. This page will reveal all the secrets of how such devices work and what they are used for.

What Is A Thermal Imaging Device?

In fact, the thermal imaging device is a basic camera, but depending on the type of gadget it may have some constructional peculiarities. However, no matter what variation it is - the principle of work is the same.

Any portable thermal imaging camera creates a picture of anything in a special way: it renders the image in the red and blue scale where red shows the high temperature of the item and a blue - the low one. It‘s because of sensitivity to infrared (IR) radiation rather than to the light like in the regular cameras.
Infrared emittance is one from the line of the electromagnetic spectrum. And like the other types (x-rays, microwaves, ultraviolet, etc) it has its own length of waves. In particular, the IR wave range is within 7 and 14 nanometers. And, since all objects have their own black-body radiation, the portable thermal camera measures the wave’s length and then displays it on the screen in a corresponding color scale. Besides, the warmer object is, the more radiation it gives off, so a thermography device detects it much easier.

What Types Of Thermal Imaging Cameras Are There?

There are 2 types of thermographic cameras that vary one from the other by the presence of uncooled and cooled detectors. Let’s take a closer look at them and what they are used for.

How Do Thermal Imaging Devices Work?

Whether you use a handheld thermal camera or thermal vision glasses, the main trait is that none of the thermal vision devices can’t use lenses made of glass. The reason is that the glass doesn’t consume infrared waves, but it blocks them instead. That is why all the thermal imaging devices along with cameras need to have special materials. In particular, there should be one from newly developed chalcogenide glass, crystalline silicon or Germanium.

However, while all of them are pretty solid and have higher refractive indices, this detail is still disadvantageous, though, since according to Fresnel’s rule, it causes numerous reflections that may distort the final result.

In order to prevent such effects, the optics of thermal vision goggles or handheld thermal imaging camera are coated with the special anti-reflective finish. And this is another great influencer of the higher price formation.

So in total, any thermal imaging device consists of a few necessary parts: the optics, sensors and detectors, amplifying mechanism, signal processor, and the screen. Depending on what type of heat vision device you have, its body construction may be absolutely different. Moreover, it can have additional protection such as a layer of rubber, sealed housing, etc.

What Are They Used For?

The range of the fields where the handheld thermal imaging device is widely used is almost unlimited. So here are some of them.

If you haven’t found the examples of your industry, but you are thinking about where to find reliable manufacturers that can design and produce a similar device for your business, then you’ve almost reached one. The Axonim company is exactly what you are looking for. So just hit a button and drop us a message. 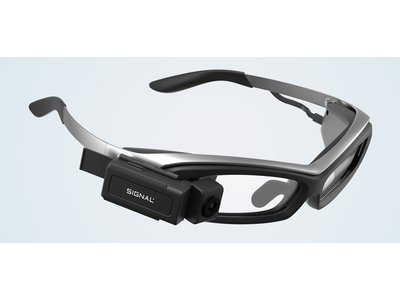