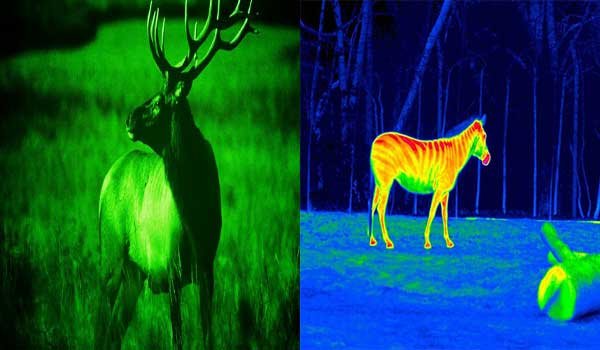 In certain cases when you are sitting in total darkness, you may consider having thermal and night vision devices. Thus, later, when going to the specialized store the variety of available options will definitely confuse you. As a result, nothing will be bought. Thus, you should prepare for such a purchase in advance. So the below information will help you to know more about such a tricky device.

What types of night vision are there?

It’s obvious that night vision technology allows us to see in total darkness without an auxiliary light. However, the principle of the work of modern products differs a lot. Let’s have a look at each method more closely.

Why is the thermal imaging night vision principle better?

The thermal imaging night vision principle is a way better than the predecessors. It’s because of their huge drawback that they required additional light sources to render the image. As a result, they either produce a low-precision image or come with an additional device that makes the whole unit heavier and bulky.

Meanwhile, the thermal night vision camera produces fine or, even, HD pictures. The quality of the image doesn’t depend on the ambient light, so there doesn't need to be additional equipment. Moreover, unlike the other methods, this one allows you to see the minimal temperature changes even though the obstacles such as rain, fog, etc.

How far can you see with thermal night vision devices?

Despite the fact that night vision with thermal overlay provides high-resolution pictures, the result that you may expect may be absolutely terrible. Thus, there occurs the question, how far does the night optics thermal camera see.

In fact, there is no particular answer. The reason is that there are lots of variables that influence the result. The main is the lenses, the type of camera, weather conditions, the size of the object, etc. That is why there was developed a list of criteria that helps to define how good the comprehension is. The author was a scientist in chief of Night Vision and Electronic Sensors — John Johnson.

The first stage is “detection” which refers to understanding whether the object is present or not. In order to do that, the object should be covered at least with 1.5*1.5 pixels.

The second stage is “recognition” which refers to understanding what this object is. In particular, whether it is a person, animal, or vehicle. For this purpose, the object should be subtended by at least 6 pixels

The “identification” stage means that the object is not clearly seen yet but it’s possible to understand who is in front of you by recognizing particular things. In order to do that, the object should be subtended by a minimal scope of 12 pixels.

As it was already mentioned, these digits are approximate. Because there may be lots of obstacles that will distort the final result. Thus, these tables are just a recommendation for potential users.

What available forms of thermal night vision devices are there?

What are thermal night vision goggles with heat sensor used for?

Luckily, thanks to technical progress, now we can have unbelievable skills. For example, thermal imaging goggles with night vision allow us to have an animal’s sharp sights. So, so now, people can go on hunting at night without any difficulties.

However, still, the major consumer of night-vision goggles with heat sensors is the military. This is an effective instrument against illegal migration at the borders that usually intensifies at night, and, against potential enemies.

Meanwhile, the civilians also apply thermal night vision glasses at work. For example, it’s quite important to use such devices when building. Or, this is an irreplaceable thing in rescuing people or firefighting.

Besides, there may occur an idea of where thermal night vision can be applied. And you may need a reliable partner who can bring the abstract into life. Then, it’s better to drop a message to the Axonim company, who can do it really quickly and with no fuss at all!